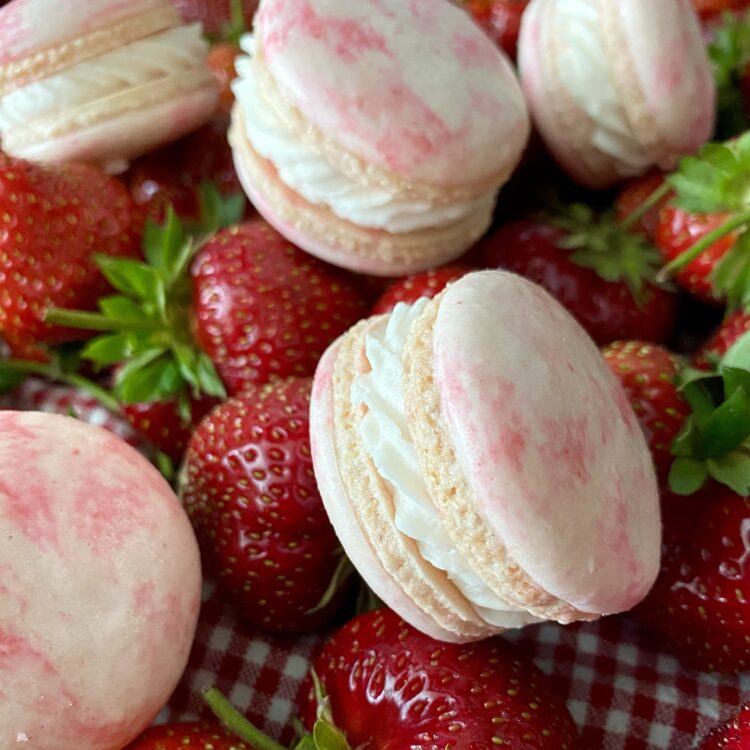 “That was heavenly” – Sarah, neighbor and resident macaron tester.

More and more, I find myself in situations where I wish I had a quality vegan dessert recipe up my sleeve. Whether it’s staff appreciation, book club, or a neighborhood gathering, I’m noticing that there’s always a few people who are opting to eat vegan. As someone who has experienced some hefty food restrictions, I want to always ensure I’m providing something for everyone at a gathering. My problem is that pretty much every dessert I have ever made includes butter, dairy, or eggs. Not vegan friendly! When I came across Pies and Tacos recipe for Vegan Strawberry Macarons, I knew I had to try a vegan macaron. It would be my chance to make something yummy for all the plant based foodies in my life. This recipe is bonus amazing because it’s gluten free, corn free, dairy free, and vegan. That’s serving a lot of dietary needs in one crispy, chewy, fruity, beautiful dessert!

The key to vegan macarons is using plant based aquafaba as a substitute for egg whites. I had my doubts about using canned chickpea juice (aka: aquafaba) in place of egg whites for macarons. I mean, serious, side eye doubts. Would it have a funky bean flavor? Would the shells have feet and still rise the same? Would the texture be the same? With a skeptic heart, I dove in and was quickly surprised by the results.

Following the guidance of Camila’s (Pies and Tacos) recipe, I made sure to purchase a can of chickpeas (aka: garbanzo beans) that did not include any added sodium that might impact the flavor of the shell. I discovered an average (15oz) can of chickpeas should have enough juice for two batches of vegan macarons. I chose to add a light pink color to my shells as well as some stripes of color to the piping bag to achieve something of a marbled look. A quick dusting of rose gold edible luster when the shells came out of the oven added that extra classy vibe. Sparkles are classy, right?!

While the strawberry macarons looked delicious, my mind kept wandering to some freshly picked local strawberries and a bottle of Amoretti Artisan Natural Guava Flavor that I’ve been wanting to try. I decided to craft my own filling recipes to fit the bill. I was pretty sure strawberry and guava paired well because I used to drink strawberry guava juice in middle school and high school. (Mom used to buy mixed packs of juice bottles from Sam’s that my siblings and I always took to school in the mornings. Haven’t had those in YEARS!!!) It made the most sense to me to make the vegan buttercream guava flavored and I would make my own strawberry jam to compliment the guava. I didn’t want the strawberry jam to be one note, so I researched (read: googled) what other flavor profiles pair well with guava. It turns out that all citrus fruits compliment guava. With that gift of knowledge, I added Japanese Yuzu juice (similar to a cross between lemon and mandarin orange that I found at my local Asian market) and VAIN Citrus Vanilla Drops to the jam. The citrus notes kept the jam really tart, the vanilla mellowed all the sharp and bitter notes, and that was complete serendipity with the sweet guava “butter”cream.

The macarons had the best flavor and texture the day after assembling. The day of, the vegan shells seemed more crispy and lacked some of the chewiness you expect from a typical macaron. Of course I tried one right away, that’s how recipe development works! The next day, all the textures and flavors came together fully developed.

Please note: You can absolutely use strawberry jam or preserves from a jar. I like making my own and I share the recipe below. I recognize that there are some specific ingredients that I am citing, but those are ingredients I have around from doing other baking projects and I believe they are high quality ingredients that add a depth of flavor that I enjoy. If you want to make your own jam but do not want to purchase specialty ingredients, you could totally substitute lemon or orange juice for the Yuzu and your favorite vanilla extract for the citrus vanilla extract.

When making macarons, you’ll always get the best result if you weigh your ingredients.

Let’s cover the process for the shells.

I made my jam and “butter”cream while the macarons were drying and baking.

Once your shells are completely cooled and sparkly, it’s time to assemble. I like to match my shells up like it’s the dating game, then flip one over so I can just go down the line with the fillings. I used a French tip to create the “butter”cream ring and then filled the inside with the cooled jam.