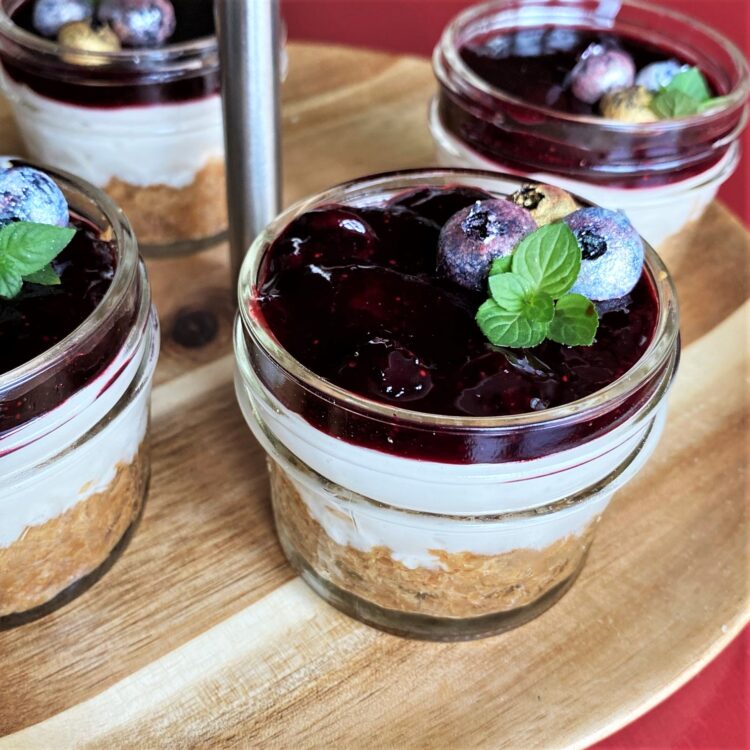 This recipe is an oldie that I’ve revamped a bit.

My mom made a version of this no-bake blueberry cheesecake when I was growing up. As it’s served cold, it was always refreshing and was an, “easy to put together” summer dessert. Traditionally prepared in an 8×8 square pan, with 6 (mostly premade) ingredients, you couldn’t beat this crowd pleaser.

This summer, I decided it was time to make it for my family with a few upgrades. The casserole dish was swapped for classy little 4oz Ball jars; perfect for creating an individual dessert that looked elevated and also practical. I played around a bit with some edible prism powder on the fresh berries I used to adorn the cheesecakes along with some fresh mint from the herb garden. Everyone’s been glitzing up their fresh fruit dessert garnishes on IG, so I just hopped on the band wagon. The outcome speaks for itself.

I did bake this recipe up a notch by adding some cinnamon to the crust, preparing my own pie filling, adding some gourmet VAIN Vanilla in Orange Spirits, and using vegan ingredients. Why vegan? Well, I have a couple members of my crew struggling with dairy, so I decided to give some of the vegan products on the market a try. I used kitehill plain dairy free cream cheese as well as truwhip vegan plant based topping in the filling and I substituted vegan European style butter for regular butter in the crust. I have to say, these products worked really well in this particular recipe. My spouse didn’t even know the cheesecakes were vegan until I told him (after he ate it, of course).

The latest, and greatest, upgrade to my version is the homemade blueberry pie filling. While a can of pie filling will work fine, this freshly made blueberry filling is easy to put together and truly spectacular. I’m sure it didn’t hurt that the kids and I had hand picked the berries we used at the local berry patch. That absolutely makes them taste sweeter!

As a kid, I always picked the cooked blueberries out of my pie filling/topping before enjoying my piece. This annoyed both of my parents, but they never denied me a slice. Thankfully, I grew out of that…..and now I roll my eyes and sigh inwardly as I watch my kids do it. In honor of my kid self, I strained the blueberry chunks out of the pie filling for two of the individual desserts. It wasn’t any hassle. It took only a few extra minutes to scrape the filing through a mesh strainer. The kids showed their appreciation for this act of service by consuming their entire portions. Let’s call that a win.

Whether you go the traditional route, or try this new fangled vegan recipe, this dessert is an easy addition to your summer dessert lineup.

OH! You can use any type of pie filling you like for the topping. Cherry, strawberry, strawberry rhubarb, peach, blackberry, and raspberry would all be delightful. Premade, canned pie filling works great for this if you don’t have the time or energy to make fresh pie filling.

Here are some process pics: